Creating a legacy that few other businesses have achieved, Dettweiler’s Sausage has continued to be a successful family business for more than 70 years.  It was started by  Isaiah Dettweiler in 1935.

Started during the depression as a response to the very low pork prices, it soon had many loyal customers.  “My dad could only get 3 cents a pound for his pork so he started making our smoked Farmer’s sausage as a way to try to make a little bit more money off his pork production,” said Harold Dettweiler, who took over the business from his father in June 1954.  Harold opened his new butcher shop two doors down from the family farm located beside the WaterlooRegional Airport.  Operating it under the name Midway Meat Market, that year Harold purchased a license to sell fresh meat from the town of Preston for $1.

Harold butchered beef and pork and continued to make the smoked Farmers’ sausage from the recipe developed by his father.  He also delivered his products to customers in and around Breslau and remembers how he also used to also deliver milk to Breslau residents using a horse and wagon.  “There was never any shortage of meat in our house.  Sometimes we got the most expensive cuts and sometimes we at the least expensive just to get rid of it,” joked Harold, then 86-years-old.  His wife, Margaret, and their six children all helped with the family business. Everything from wrapping and packaging, to selling, to figuring out the prices in the days before computerized cash registers, was done by family members.

In his family for over 100 years, the 50-acre farm was expropriated for an expansion of the local airport.  When Harold Dettweiler retired in 1988, his son, Ted Dettweiler took over the business and changed the name to “Dettweiler’s Sausage”.

Today, the store’s main product continues to be its popular Dettweiler’s Farmers’ Sausage.   Because it is enjoyed by many Russian Mennonites, Ted also began shipping thousands of pounds of the sausage to stores in St. Catharines (Niagara-on-the-Lake area), Port Rowan, Simcoe, Tillsonburg and Leamington.

In 1997, Kim Dettweiler, Ted’s sister-in-law, took over the operation of the Dettweiler’s Sausage store in Breslau.  The store continues to provide the products its loyal customers have come to expect including pepperettes, shish kabobs, breaded schnitzel, ribs, bacon, pork chops, summer sausage, and, of course, several varietys of Dettweiler’s Sausage. 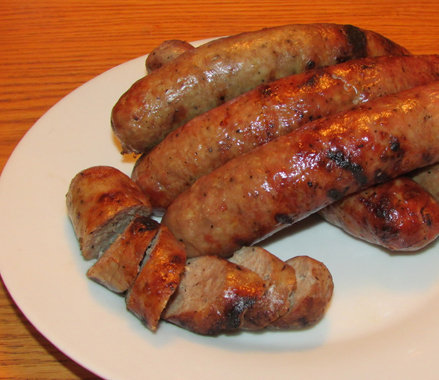